Phoenix Award: Rising to the Service of Humanity (2012), MISS Foundation

Board of Visitors Eminent Faculty Award (2002), University of Memphis

Neimeyer's contributions to the fields of psychology and thantatology (the study of death and dying) have been recognized through the receipt of numerous awards for his scholarship, his teaching, and his leadership by several national and international associations and institutions.  He also has served as President of the Association for Death Education and Counseling, and as Chair of the International Work Group for Death, Dying and Bereavement, as well as on national task forces for formulating a role for psychology in end-of-life care and for developing guidelines for best practices in intervention, research, and public health initiatives to mitigate the impact of suicide bereavement.

Dr. Joanne Cacciatore of the MISS Foundation confers the Phoenix Award:  Rising to the Service of Humanity, to Neimeyer for his contributions to the study and treatment of parental bereavement. 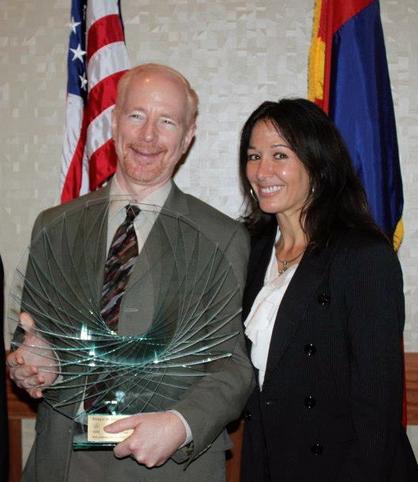